In 2021, new research projects are added to those launched last year. Following the last call for CominLabs projects, eight scientific projects have been selected by the Board of Directors of Labex CominLabs with the contribution of our International Advisory Committee for the evaluation of the submitted projects.

The amount of information available online is huge and keeps increasing very fast. As examples, every minute, 500 hours of video are uploaded on Youtube, and 240,000 images are added on Facebook. Since it is physically impossible that this huge mass of data is entirely processed and visualized by humans, there is an absolute need to rely on advanced Machine Learning methods so as to sort, organize, and recommend the content to users. However, as a crucial step, the data should first be transmitted from their point of collection or creation to a server for further storage and processing.

The conventional communication framework assumes that the transmitted data (images, video, voice, etc.) should be completely reconstructed before their potential use in a Machine Learning algorithm. Instead, the CoLearn project aims to develop a novel data transmission paradigm fully dedicated to and optimized for learning applications. This will require to completely rethink the design of transmission systems, by introducing new performance metrics related to learning, and by developing novel coding techniques that allow to perform learning without prior data reconstruction. The CoLearn project therefore lies at the interface between the fields of information theory, source/channel coding, and machine learning.

Imaging the brain anatomy and electrophysiologic activity is critical to many applications including electromagnetic dosimetry, neurostimulation, brain computer interfaces, and the diagnosis of diseases such as cancer, epilepsy, and Parkinson’s. Two types of imaging exist: structural and functional; the former targets the brain structures and material properties while the latter focuses on the brain (electrochemical) activity. Until now, structural imaging has been underlying most functional modalities that are improved by better structural knowledge. CYCLE proposes to close the loop and, for the first time, to reverse the process by improving structural imaging with functional imaging. Iterating this cycled scheme would be game-changing, since plethora of functional and anatomical imaging techniques and their applications would be improved at low and high frequencies. 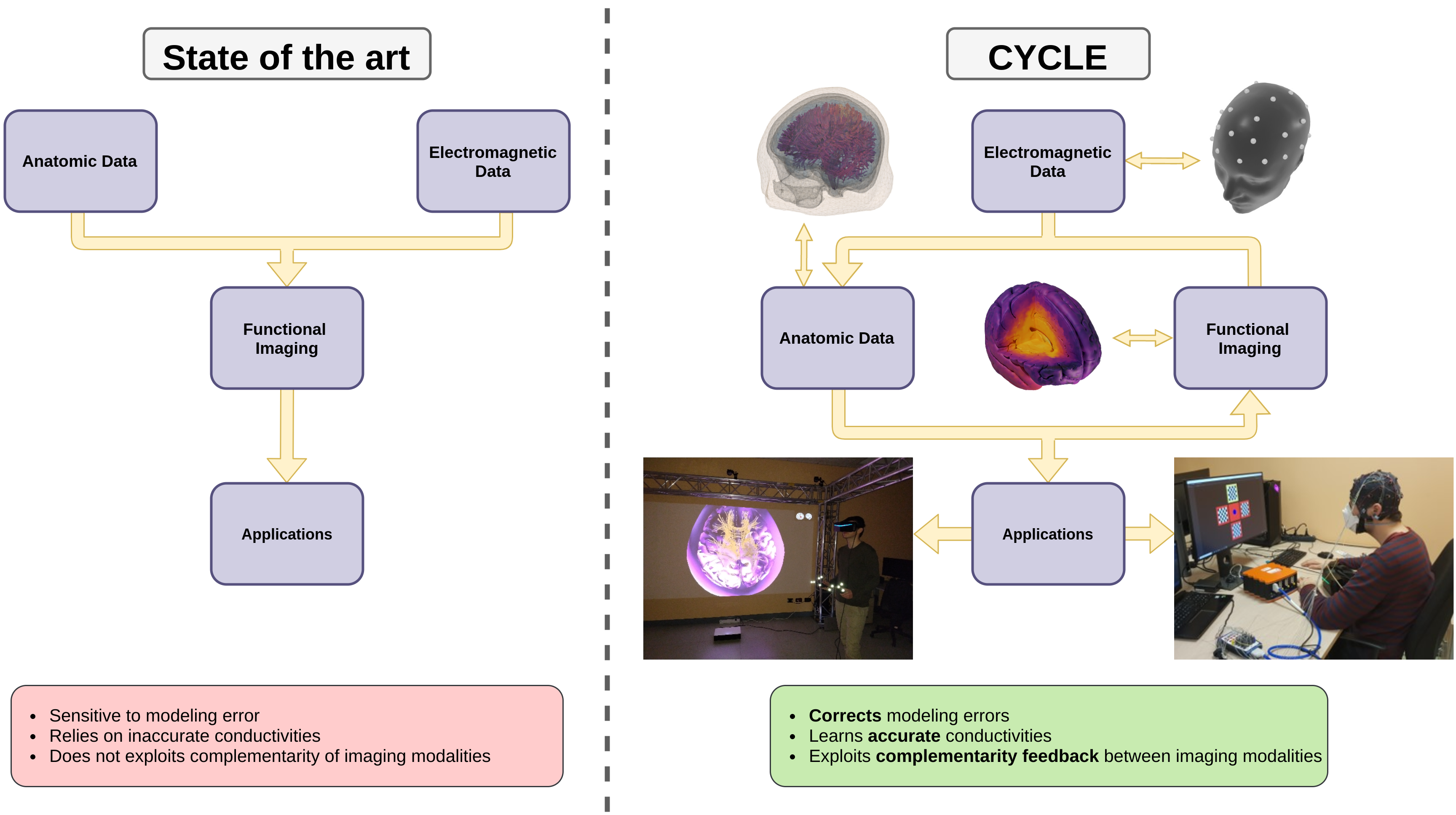 Deep learning breakthroughs in recent years have motivated an explosive demand for intelligent edge devices. For many of them, such as autonomous vehicles and healthcare wearables, there is a strong need for real-time and on-site learning in order to enable them to proactively learn from new data and adapt to changing environments. However, building such systems is a massive challenge due to the limited resources available in an embedded context and the significant training costs of modern deep neural networks. In order to realize the full potential of deep learning, it is imperative to improve existing network training methods and the hardware being used. LeanAI will attack these problems at the arithmetic and algorithmic levels and explore the design of new mixed numerical precision hardware architectures that are at the same time more energy-efficient and offer increased performance in a resource-restricted environment. The expected outcome of the project includes new mixed-precision algorithms for neural network training, together with open-source tools for hardware and software training acceleration at the arithmetic level on edge devices. 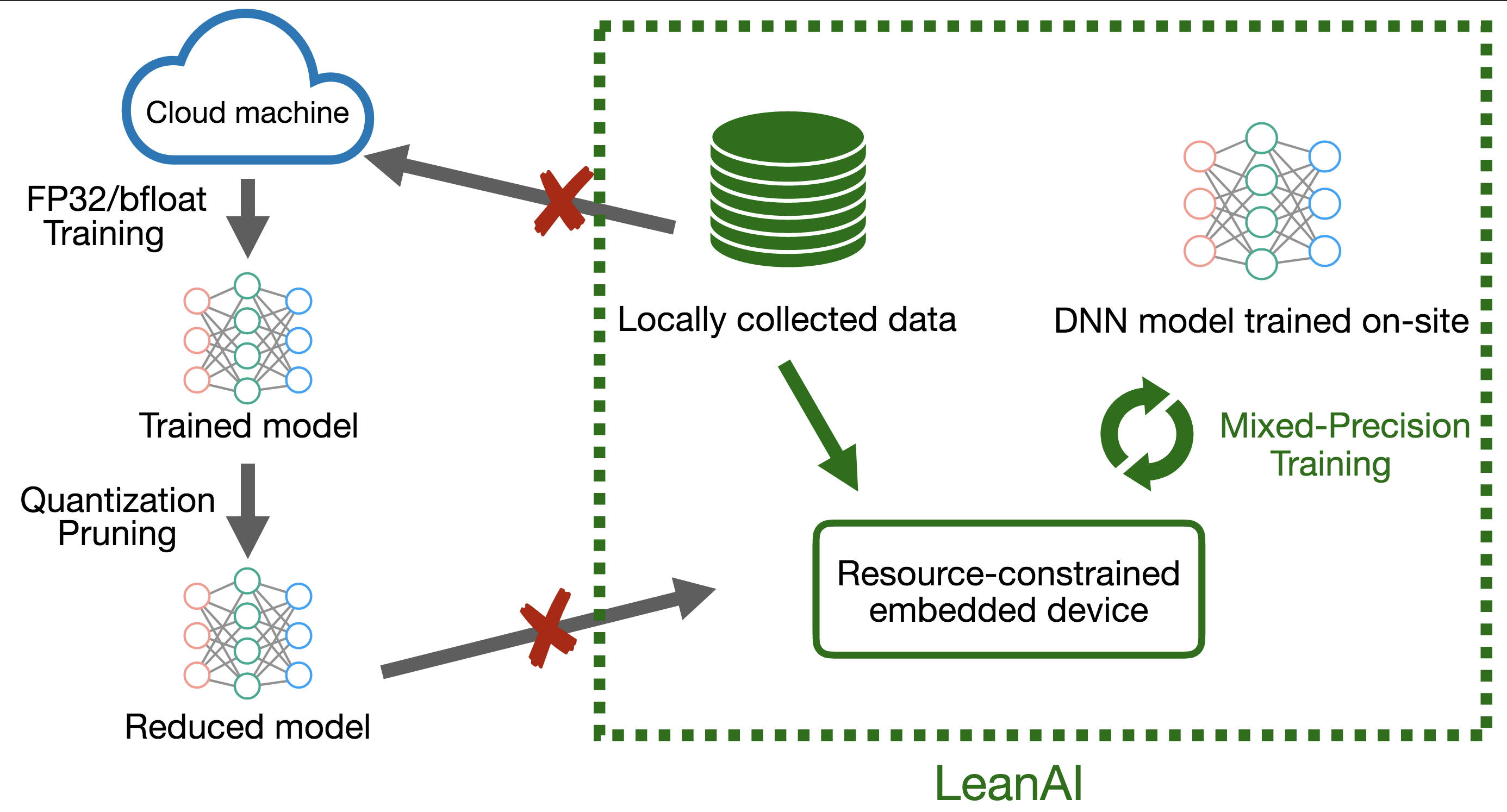 Today, a few keywords are enough to find relevant documents among the billions of documents scattered on the web. If search engines allow us to apprehend the diversity of the web, they also confront us with its noise and the search for relevant information can be more difficult than expected. A few keywords are also the necessary information to find concepts in knowledge graphs. Who is the author of Twenty Thousand Leagues Under the Sea? How far is the earth from the moon? Voice assistants simply allow us to access controlled and verified knowledge, but this is no longer the web with all its diversity.

In MiKroloG, we are looking to establish a closer link between knowledge graphs and the web. The idea is to be able to search for documents on the web, but starting from concepts identified in knowledge graphs. In this way, we hope to reconcile the high precision of knowledge graphs with the diversity of the web. To achieve this, MiKroloG focuses on three main scientific challenges: (i) resolving the entities between the microdata web and knowledge graphs, (ii) evaluating queries on large knowledge graphs and ranking the results, (iii) expressing complex queries for end users.

Autonomous smart sensors, which are powered by harvesting the energy available in their environment (e.g., solar or vibratory) are today equipped with lithium-ion batteries. These batteries generate problems of recycling, life span, and maintenance, especially for sensors deployed in hostile or difficult to access environments. However, for many applications, it is possible to do without batteries, provided that one knows how to properly manage unexpected shutdowns due to power loss. Intermittent computing is an approach that aims to take into account these shutdowns by using appropriate technologies.

The NOP project aims to facilitate the deployment and use of intermittent computing by system designers. To this end, teams from electronics and computer science will combine their skills to propose, on the basis of consolidated theoretical foundations, models of energy flows within systems adapted to online decision making, and analysis tools to guarantee the results of computations even in the presence of power loss. These theoretical developments will be integrated into an optimized execution platform, which will be used to build a demonstrator in the bioacoustics domain.

Promoters of blockchain-based systems such as cryptocurrencies have often advocated the anonymity they provide as a pledge of privacy protection, and blockchains have consequently been envisioned as a way to safely and securely store data. Unfortunately, the decentralized, fully-replicated and unalterable nature of the blockchain clashes with both French and European legal requirements on the storage of personal data, on several aspects such as the right of rectification and the preservation of consent. The PriCLeSS project will establish a cross-disciplinary partnership between Computer Science and Law researchers to understand and address the legal and technical challenges associated with data storage in a blockchain context. PriCLeSS will operate along three parallel research axes. The first will explore the benefits that blockchains can deliver in terms of privacy and legal compliance when dealing with personal and confidential data. This will open the door to the design of tools that can automate the auditing of privacy-protection measures. The second axis will investigate privacy and legal challenges, and will explore novel abstractions that can help align the internal workings of a blockchain system with legal constraints. The third axis will tackle the subset of legal requirements that are inherently incompatible with the nature of a blockchain by leveraging a larger ecosystem of tools built around it.

Data of an application should not be accessible from other applications on the same system. Nevertheless, so-called side-channel attacks succeed in circumventing this isolation. Therefore, a malicious application could extract, from a victim application, cryptographic keys, or more generally any confidential data. The existing countermeasures against side-channels are often either entirely software-based (we take care in producing programs that are not vulnerable to these attacks) or entirely hardware-based (the processer detects/prevents these attacks). These approaches are successful in securing the applications; however, they reduce the performance of the entirety of the protected application.

The SCRATCHS project aims at co-designing a processor, offering several security primitives, together with a compiler leveraging these primitives. This co-design will allow enabling the protections only when necessary, in order to achieve the same level of security as with the existing approaches, however with a reduced performance overhead.

Nuclear imaging technic such as Positron Emission Tomography (PET Scan) has become an indispensable tool to detect cancerous tumours.  PET Scan is based on the injection of a radioactive positron-emitting atoms tracer into the bloodstream that attaches itself to tumour cells. The presence of positrons is detected in the scanner to allow reconstruct on a PC a precise image of the tissues. A new imaging technique, called 3-photon gamma imaging, is proposed by the IMT Atlantique SUBATECH Laboratory. This technique is based on the direct 3D reconstruction of the position of the Scandium-44 (44Sc) radioactive emitter (β+,γ). The 44Sc emits a positron and a gamma photon in coincidence time as required by the proposed imaging technique. The third gamma allows the incorporation of additional spatial information in relation to the conventional PET using only two gammas. Although detected, the position of the third gamma emission is not directly measured but is reconstructed using a Compton liquid xenon telescope. Crossing the two pieces of information allows reconstructing the position of the disintegrating emission point, which is currently impossible with current nuclear imaging techniques.

Still at the level of fundamental research, a first 20 000–pixel camera capable of scanning a small animal, called XEMIS2, is currently assembled at the Nantes University Hospital imaging centre, first images are expected in 2021.